History of SAP Business One – Chapter 11 – Innovation , All the Way

Innovation was the cornerstone of SAP Business One from the start. Penetrating a conservative market of accounting software, dominated by local legacy systems without bringing any added value, new technologies, or management tools could leave SAP Business One in the competitors’ trail of dust.

But the opposite happened. The acquisition by SAP exposed the SAP Business One start up spirit to new technologies of SAP’s development, as well as cooperation with some of the biggest names in the industry those days. Here is the untold story about the product that came ahead of his time and the collaboration with those tech giants; –

The untold story of Business 360 (Also Known As “Cyprus”)

In mid-2005, it was clear that two main competitors were emerging and taking a bigger part of the SMB cloud market – NetSuite and Salesforce.com, which joined the market in the late 90’s. Both were established by former Oracle executives and financed directly and indirectly by Oracle, a long-time SAP archival.

During the SAP Analyst Summit in Las Vegas and at the SAP Business One Tech Summit 2005 in San Francisco, 2005 SAP announced that “Small-business solutions team will gradually service-enable SAP Business One based on enterprise service architecture (ESA) – a business-driven software architecture in which SAP is a pioneer. The process will take a few years, but will result in the encapsulation of SAP Business One business logic in Web services.”

Few months after the start of development, there was a strategic meeting with Geoffrey Moore, a well known American organizational theorist, management consultant and author – and his conclusion was that the product looks too much like QuickBooks, so SAP has to change it completely to match the vision of the new product

Under Shai Agassi’s leadership and sponsorship, (then president of the SAP Product & Technology Group), the strategy changed and also the B1S name changed to Cyprus – a back office, online E-commerce store and auction arena in one integrated system.

Not only the product strategy changed, also the user interface that became more modern using Adobe Flash as the front end, but more importantly, was a full collaborating with Yahoo! as the commerce store ,with eBay as the auction arena as well as PayPal and Bank of America for payment. Adobe showed great enthusiasm and contributed to the development efforts.

Oren Ryngler Then Cyprus solution manager recalls that “the team of 80 acted as start-up within SAP, conducting from day one user experience and content research meetings with potential companies in the very small market segment and based on customer feedback, developed the new design lead by Adobe consulting”

The Cyprus project ended mid of 2007 after Shai Agassi, the main sponsor left SAP. Looking back, it seems the project vision was ahead of its time, for example:

Scrum –The team implemented the scrum in 2006, long before it became a standard in SAP. A scrum expert conducted a workshop and the scrum process became a part of the daily activities with open communication between the teams and biweekly meetings to give full transparency of the project progress.

Cloud –Software as a service (SaaS) was a major part of Cyprus already in 2006 and meant to be hosted by SAP. There is no doubt that if Cyprus would have continued, the experience and knowledge of cloud in SAP would have helped the company adopt the cloud strategy earlier.

Integrated E-commerce – building an E-commerce platform integrated as the back office of the internet giants, Yahoo! and eBay on the cloud was the first experiment in SAP. It included the auction arena with eBay, full E-commerce capabilities with Yahoo!, payment process with PayPal and shipping process with UPS, FedEx and DHL.

User interface – the very modern, flexible user interface based on Adobe Flash was a real revolution for user experience, bringing all information under one screen and the concept is still in use in the SAP Business One dashboard.

SAP Business One on a USB stick

The SAP Referral Program was launched at end of 2007, aimed to target professional agents, service providers, accounting and financial professionals and other ecosystem members to register opportunities which they come across in the SME space. The objective of the program was to build new customer contacts within the SME market which were not previously addressed by SAP, reaching new prospects.

One of the goals was to provide partners with a cheap, easy to use, and convincing demo environment (used in sales cycle). The tool was SAP Business One on a USB stick including full documentation and MaxDB database with no need of installation/configuration: just plug it into any PC and demo.

As one of the project managers declared “Using the U3 Demo Sticks we were able to recruit and enable many more sales agents without technical background to do professional demos.

They have now become Evangelists of our product – so many more CEOs of small enterprises are getting their view of the software and are finally coming around to SAP.”

In Mid-2011, SAP announced SAP HANA, an in-memory, column-oriented, relational database management system developed and marketed by SAP. Responding to the need of innovating its solution, the Business One development team started a project of migrating SAP Business One to SAP HANA.

This new version of SAP Business One required certified servers and a significant transformation in the way our partners position and deliver the solution. Thus, a go-to-market program was established to cover these changes (e.g. installation, training, pricing, positioning and messaging, etc.).

Responding to the need of innovating its solution, the Business One development team started a project of migrating SAP Business One to SAP HANA. At the end of February, 2012, SAP released the side-by-side solution where SQL version runs side by side with SAP Business One Analytics, powered by SAP HANA. .

We signed Our first customer in the Netherlands, then a second one from Germany at CeBIT. Volker Anders, Head of SAP Business One roll-out team demonstrated the product to Hasso Plattner. Later that year, SAP Business one , Version for SAP HANA became the first ERP fully in memory in SAP. It’s first customer came from India, a dental clinic with 30 users, that went Live in two months.

Click to watch Hasso Plattner Co-founder of SAP in his CeBIT 2012 keynote. 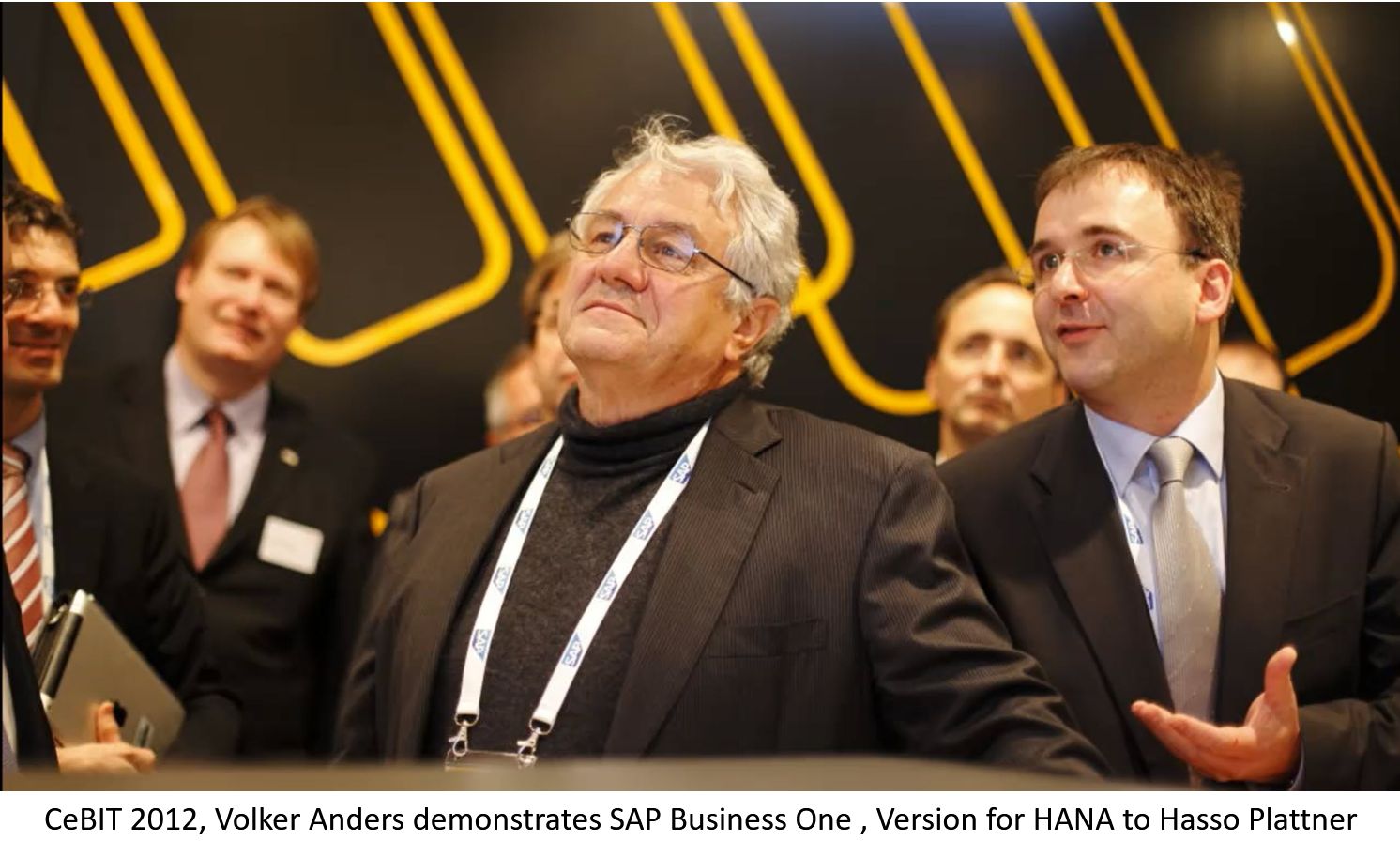 Steve Gouveia, Global Business Development Manager at SAP, was the program lead for SAP Business One, version for SAP HANA. He recalls that “one of the first HANA customers complained that his server is located underneath its desk and it was very noisy and too loud due to the big fans to cool down the 2 powerful CPUs. The customer decided to switch off the fans, which solved the noise issue but damaged the server.”

Darius Heydarian, a member of the SAP Business One roll-out team recalls: “In June 2011, a so called SAP Business One Hybrid Solution, which was described as a side-by-side approach, was introduced to the market. It was clear from the beginning that the side-by-side approach was only the start of the journey. The so called one-box (transnational and analytical data in-memory) approach was released seven months later in 2013. From that day on, we had to maintain two different code lines for the SQL and HANA version, which were joined to one code line with SAP Business One 9.0.”

SAP Business One on Cloud

In 2011 it became obvious that a cloud version of Business One had an opportunity to capture a customer segment that SAP Business by Design didn’t address. It was primarily the market segment of companies below 20 users. The main question that SAP Business One Leadership Team wanted to answer was – what it would take to deploy SAP Business One with an attractive total cost of ownership (TCO) to the growing market demand of customers that were looking for a cloud solution.

“The answer was an architectural enhancement to SAP Business One called Cloud Control Center (CCC), which is still around and has developed into the centerpiece of SAP Business One Cloud. The CCC was the starting point of a development that aimed at sharing infrastructure resources, centralizing life-cycle management tasks and giving our partners an environment to deploy SAP Business One to multiple customers with a much better Total Cost of Ownership than deploying customers one by one.”

While most vendors were after serving their customers in a direct go-to-market, SAP Business One Cloud was designed to support a 100% indirect channel where partners sell, implement and operate a cloud-based ERP system.

In March 2012 B1 Cloud, then called SAP Business One On-Demand, was introduced to the market at the CeBIT in Hanover and was shipped to partners a few weeks later. Today, this model runs thousands of customers in Cloud operated and hosted by SAP Business One partners.